Went up to take a photo of our half filled trench from the street for electricity and water as well as, it seems, a conduit for something? Rang the phone guy "R" to let him know the trench has been opened and he is now coming on Wednesday to put in the phone connection. They seem to have filled half the trench back in. At least there are no huge rocks lying about so we shouldn't get a bill for rock removal. That's why the photo was taken. We have the evidence. :)
Our last worry/ hurdle with earthworks additional bills. phew. . Phone guy "R" was all set to terminate it in the kitchen! arghh.. obviously doesn't have house plans or details from the builder. He asked hubby who we were building with. anyway he now knows, we hope, where to terminate the phone line in the house. 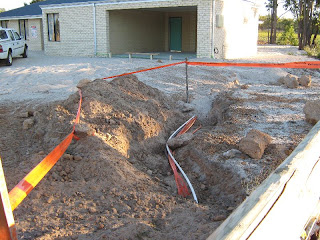 Spoke to the tiler "D" today to let him know the phone guy would be calling in on Wednesday. Since I had my camera with me I had a quick look around. 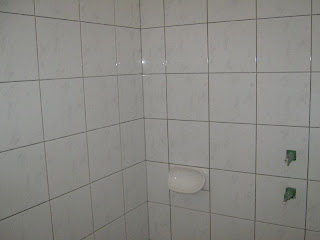 Main loo has a clean float floor ready for tiling and he's almost finished doing the same in the main bathroom. The hobs for the main bathroom shower and under the bathroom cabinets are done. He's made a start on the ensuite tiling. Just the wall tiles in the shower atm. I can see something green on the walls. I assume it's waterproofing. 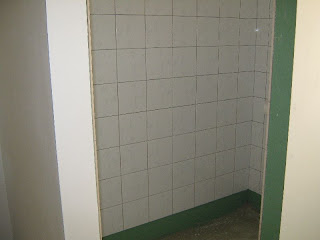