So it begins.. again

The plasterer came this morning.  He's fixed in a heap of screws running in about 800mm from the side wall ( load bearing wall) on each joist(?) where the falling down plaster board is.  He's also  fixed screws to either side of the long plaster board gaps in the  kitchen and family room sections of the room. Red line is where the plaster was falling down. Green lines are where there are large enough cracks in the plaster boards for repairs to once again be done. 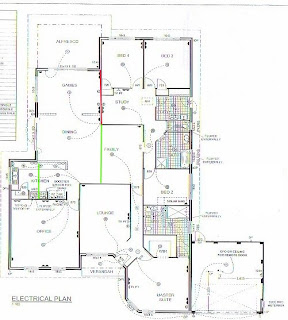 The plasterer is going to return on Wednesday.  he says at around 9.  Lets hope he's there then and I'm not spending my entire day waiting for him. Of course this return is for him to skim and flatten the boards. Then he has to return to sand which will be messy. Then someone else will have to come and repaint. It's a big area.   The ceiling runs through without any cornice or door frames all the way into the kids activiity room.  So it might all need to be repainted.

Thursday night, tucked up in bed when Hubby dashes past the bedroom and heads out to the garage.
"Ceiling is falling down!" he exclaims as he rushes past.

It seems the dramas with our ceilings are not yet over.
We'd been watching as the cracks had gotten worse in several of the ceiling board joints once again  but this was /is something else.
It might be the glue or just another example of poor workmanship from the plasterers.
One length of wall in the games room, right above several  computers has come away from whatever holds it up.  Not just the cornice but the plaster board. It's a length of about 5m. At worst it drops about 10 cm.
So yesterday morning a call was made to the maintenance supervisor, "D"  He sounded fairly relaxed about it when Hubby called him on his mobile. But 10 minutes later , I'm guessing after arriving at work, and checking our our build history he called back, a little less complacent. He said he'd be out with someone else as well.  True to his word they both arrived within 2 hours.
They also took a good look at the cracked plaster joins. So the plasterer will be expected to return. fix the problem, including redoing all the cracked board joints.  Here's hoping this time he and his workers actually don't make as much mess.  Fingers crossed they will actually call and organise times to come rather than just turn up and expect to be let in without notice as they did last time. We've sent an email to "D" with the times it suits us for the next week to have someone come out.  Eldest has 4 exams next week, I have chiro appointments etc. So they will have to work around us. Last time was a pain in the...
So lots of additional screws into the plaster board, repatching and repainting. Again! I hope it doesn't drag on over 8 months this time. G put up some pipe and used 2 brooms to stop the ceiling from slipping further and hold it in place on Thursday night. Hopefully today the plasterer will call and come and add some screws to hold it in place.

Posted by kexkez at 7:42 AM No comments:

Just over 5 1/2 years ago we decided to move away from the city to live in a smaller community.  I applied for a transfer and got one to start the following year. So we packed up and headed several hours south and ended up about 35 kms from the coast in a small rural township. We bought 3/4 of a acre in town and over the next year built a new home. Work = 120 kms round trip each day through some beautiful country.
Life is busy and very full. My husband started a new job this year with a 12 month  traineeship at the local community centre. It involves some study as well. Trying to update his C.V with current experience and references was pretty tricky having only worked pt for a couple of years stacking shelves after 11yrs of FT House-Dading and keeping us all sane. Hopefully the traineeship will lead to further work. Eldest is in final year of school. Stress time for all with it being the final months of school and of hubby's traineeship. Will we all survive it???

So says the  About US section.  Of course there is more to it than that.

The traineeship is purely due to funding from Royalities for Regions.  Yippeee.  :)
Because hubby is a mature trainee and the funding stretches only so far. So he is employed 3 days a week. The contact is only for 12 months. Most  trainees get an 18 month contract. Full time. The course work  usually gets to be done over that 18 months and mostly during work time.  He's trying to finish it in 12. We are holding our breath a bit atm as  they are trying to get funding to extend his contact which would take the study pressure off a bit and mean he doesn't have to start applying for other work just yet.

Eldest has struggled a fair bit this year.  He wasn't sure until recently what he wanted to do when he left school having changed his mind/career plans earlier in the year.  He now has a goal. It's a tough one. There are plans in place if he doesn't make it.  But he's feeling the pressure right now.

My back hurts. It's been 3 1/2 months of pain that was gradually getting worse. We know it's one of 2 things. I've been referred on to a neuro surgeon. There's a strong possibility I'll need some sort of  surgery. Perhaps minor, perhaps not. So we wait and see. It just adds to the stress level. Feeling pretty flat today as I had paid to go to a 3 day conference in the city. Australian Conference on Computers in Education. Sigh.  Was advised not to go. I doubt I could have handled the journey up anyway. Very frustrating reading all the tweets, FB posting and emails related to the conference.

On the house front:
The  garden is looking decidedly rough. The weeds are getting tall.  Lawn had a rough winter. I'm hoping now the weather is warming up it will recover. Paving is on hold, mostly.  Hubby spends non studying time working on  removing one of the nastier weeds from the  backyard by hand. There are more out in the front garden hidden amongst other weeds.  It has spiral seeds that get trapped in the dogs fur. I've snuck in a couple of small tube stock plants and did manage to mostly weed the front lawn ( before we got the news on my back)  I will get to a bit more. But its a case of  only a little at a time, then ice. :) We have a mound of paving and mulch still to be used taking up a big section of verge.  The tube stock planted over the past couple of years is all growing nicely.  The roses look very happy with their new growth sine I pruned them . I need to give them a good feed of blood and bone mixture. ( next task) Most of the dwarf abelias are happy.  We lost a couple at one end of the hedge. I'll try again when i can get a chance to improve the soil in that spot. I've discovered we have 8 sun orchids growing in the back. The count is rising slowly.  Fingers crossed the dog leaves them alone.

The boys are walking the dog.  Though I worry about the huge unfriendly dogs at the end of the street each time they go out. They are behind an electrified fence that is 1.2m high. BUT the owner told me the dogs aren't really bothered by the fence. I'm not really sure what sort of dogs they  are but they are big, powerful, and they growl, hackles up  when they see anyone walking a dog. Someone told me, "pig hunting" dogs. You get the idea. When the people first moved in we had an encounter with them as the 3 dogs  bailed us up on a walk. This was before they had fences. The owners were panicked as they saw us. They dashed  across the road to grab their dogs just as things were getting more tense.  So I worry when one of the boys tasks the dog for a walk even though they know to walk in the other direction once they get to that street.