Some visitors and gardening in rocky soils 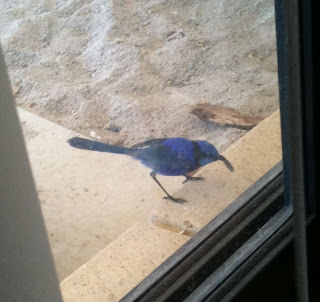 Late yesterday morning  the bird sounds we'd been hearing became louder and we discovered we had some visitors.  A "splendid Blue Wren" in full mating plummage came for a visit to the alfresco area looking for insects and bringing 2 others with it. We think they were females. It seemed quite unafraid of us watching from our slide of the glass. It investigated the spotlight on a  chair, pecking at it. We now assume it was fascinated by it's own reflection but at the time we thought perhaps there were insects and webs on it. Eventually it found a small caterpillar. It shook it about a bit and then swallowed it in one quick movement. 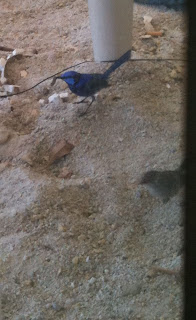 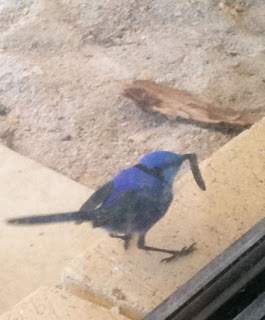 Yesterday we got stuck into weeding most of the main garden bed. It had been over run with a variety of horrid weeds.  We got most removed from the bed and some extra soil was shifted to another garden area and planted two leucadendron's down near the boundary fence between the last silver birch and the manchurian pear tree.  One is,"Safari Sunset" a lovely red flowered plant   and the other an unlabeled yellow 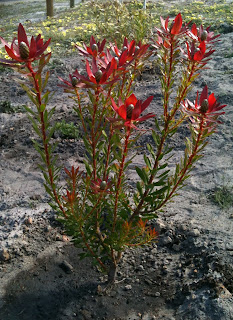 Today was to be a planting day. I got up early and collected 20+ plants, mostly tube stock in preparation for planting from in front of the house.

Now supposedly you are meant to rake your garden areas when preparing them to remove all rocks.  If we did that we've have nothing left. So I raked and dragged the rockier sections out of the way and left it at that. I left some rocks to be used as markers for later seed planting.
By mid morning the plants were all in.  A mix of native shrubs and ground covers. 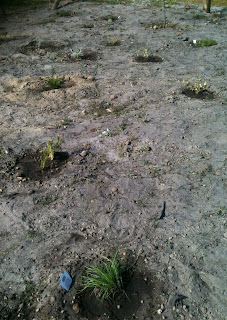 Then it was off to the next town to market day to see what I could find there and to the nursery in the same town. I returned with 3 packets of seeds for baby spinach, baby carrots and chilli's as well as punnets of cherry tomato seedlings (8), garlic chives,sweet basil, baby spinach and 5 other small native plants.
After a cup of tea it was off into the garden to plant.  I also gathered 17 society garlic plants from my plant collection near the garage.  My plan was to plant the garlic around the outside of the vegetable area hopefully  reducing the "food" aroma  that will waft towards the bush where the rabbits live.
The society garlics closest to the retaining wall need to be shifted. 3 of them are too far out of line. 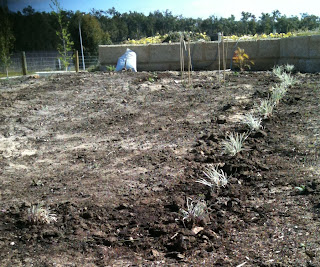 Everything planted, I watered and headed in for a cold drink and a late lunch.  It's done.   The ground is dusty in parts, rich with added soil conditioner in other parts. These sections will be for non natives and veggies. I have to investigate some thing to help out our "ned kelly" grevillea as it's being overwhelmed by the enriched soil it's been planted in.

Posted by kexkez at 3:41 PM No comments:

The trees are all starting to show signs of the warmer weather.  The Manchurian Pear has been in blossom for a while and now it has a good show of leaves  as well. The Tallow wood tree is budding, the silver birches have leaves , although they still have some growth to go. The flowering plum has some tiny little leaves just appearing.


There are so many things to plant. I did just three on the weekend.
Magnolia x soulangeana.  I suspect it will be a pink although I'd have loved to have gotten one of the deep red/wine flowered ones. 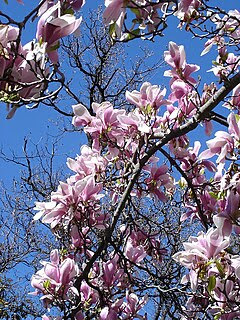 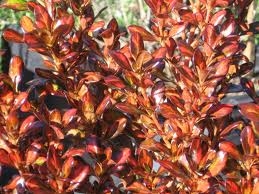 It's been a busy term at work but nothing much is happening on the house front.
I would still prefer to have reticulation for our garden and lawn at the front of the house but given that we have horrendously poor water pressure the only way to do it is to install a water tank and a pump and G isn't keen to spend the $ on that.

So for a while we were at a stalemate. Eventually  I gave up the dream and agreed to us using the money on the final retaining wall. We tried to contact our retaining wall man.  No luck. We'd left several messages and then noticed that  he'd stopped advertising in the local paper. We think he was away on holidays. ( recently we've noticed his ads have reappeared so hopefully that means his back but in the meantime...) We've found out a good friend who lives about 100 mins away can do the job though so we might end up getting him to do it.  Anyway by the time we found out about our friend we were almost due to go on 2 weeks holidays so we delayed organising the work.  Now it's starting to warm up I think I'd rather get some lawn before the much hotter weather starts than do the wall. So we are back at square 1.

In the garden there is still some earth to shift before I can get seriously started on the main front garden bed.
The 3 silver birches are starting to get leaves. We still need 2 more. The manchurian pear is in blossom and also getting some leaves. The maple and flowering plum  have little leaf buds and 4 of our larger mulberry cuttings not only have leaves but also mulberries! I'm hoping for some nice weather this weekend as last weekend we had an extra 4 teenagers pretty much most of the weekend and I was on parent duty not garden duty.  Evenings are still cool as are early mornings so we are still enjoying having a fire at night although I don't think that will happen for much longer.

Finally, 3 months down the track we again have a functioning ute that isn't a complete safety hazard. We've been able to get a replacement fuel tank so there's no more fuel leaking everywhere and the front drive area doesnt stink of petrol. YIppee. 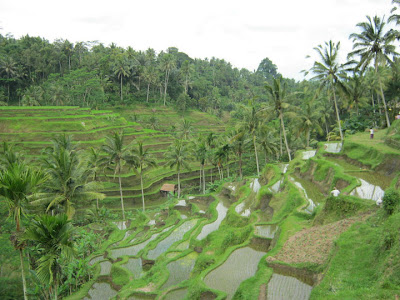 8 days in Bali. :)  We relaxed, wandered Sanur, went to an elephant park and rode the elephants and generally had a lovely time. So much so we've already booked again for next year. 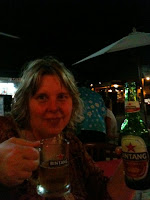 This is where we stayed

It was a fabulous little place not a hotel complex.   7 rooms around a small pool  leading to a coffee shop near the road.  This was where we had breakfast and  a number of other meals and the most delicious cappuccino's.  We've booked to stay here again.

This is the elephant Park in Taro ( near Ubud) that we visited.
http://www.baliadventuretours.com/BAT-Elephant_Park.htm

Lovely grounds and very clean, the elephants look well cared for and getting to hand feed the baby elephants was very exciting.
Posted by kexkez at 8:23 PM 1 comment: