Coming home from the shops yesterday I took a detour and drove down the street near our build. I could see a car at our block but not what anyone was doing there so last night G and I went for a drive to check out what had happened. I was wondering if the roofer had had a sudden urge to start. Seemed unlikely but you never can tell. When we arrived we realised that all the bricklayers tools were gone so that was obviously what the car/s were doing there. Since we were there we took ano0ther look around. Any excuse for photos. :)


Had a closer look at the brickwork. We were already aware of the slightly crooked solider bricks at the front of the house under the windows. My first comment on seeing them laid was, "Those bricks are crooked".
We've now found some brick damage that we hadn't notice before. We assume it's happened when the bricklayers were packing up. Where the bricklayers had a wooden plank balanced on the brickwork going through the doorframe of the slider into our meals area a brick has been damaged. We are not happy. It's right below the fixed glass section of the slider. We will be asking that it be replaced.
Hopefully it's a fairly easy job. 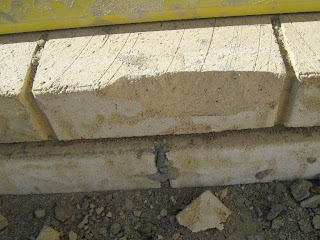 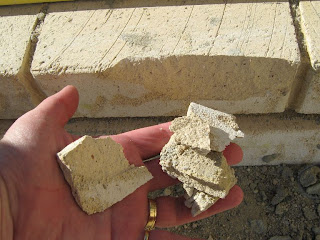 One thing we will be needing to do is some retaining walls at some stage.
This photo shows the rise from road ground level on the main street side of the house.
We have around a 1.2 m drop. We hope to retain about 300-400 mm up the slope. 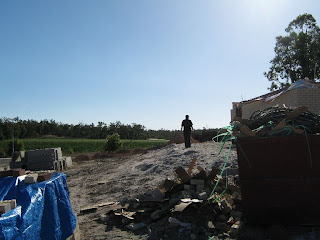 Sorry to hear about the damage, you would think that they would take more care. Especially because now they will need to come back and fix it. On brighter ntoe, happy new year, just think next new year's it will be a party in your new home!!!Cheers