Well the building seems to be rushing along now. I've uploaded a copy of the plans with all the currently built walls marked in red. As you can see there's not a lot more to be done.
DH noticed there were 4 workman there today busy on the house. 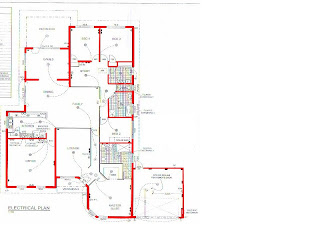 We've also has some unsettling not totally bad just sad in a selfish way type news. We've kind of grown used to the idea that no one is buying around us atm. Enjoying that we had the additional blocks around us as pretend ours. No responsibility. but all the pleasure of distance from neighbours. It seems this might change sooner than we expected. We talked to the estate agent we purchased our block through, on Sunday. We had noticed that the "for sale" sign had been removed at the start of the small sub division. He told us that the developer had decided to pull the sale advertising and give it a bit of a break then start a fresh next year. Terrific we thought BUT today Dh saw something rather startling. A new sign has been erected closer to town. There is to be an auction at the end of January to sell 2 blocks in the estate. ( if not sold sooner) The developer has also said he will " put a car in the garage " of either lot sold if they build within 12 months. hmm start build maybe. OK this could be a good thing. yes? errm well the 2 blocks he has picked out are..1. directly across the road from us on the other corner and 2.at the cross section of the t junction with the main street and so opposite us the other way. So there goes our pretend game.
I guess the developer is struggling since no one has bought any blocks. a shame he's picked the ones closest to us to sell next. Hopefully he'll come to the party and put in our trees now. DH said that perhaps if we get no satisfaction before hand on the day of the auction w e could set up camp at our house with a sign that reads"ask us about additional expensive site works costs!"
I certainly hope I'm on holidays so I can sit at the house and watch it all happen.
I guess that means we'll have people trooping through our place if it's not at lockup peeking into our build. We often see people having a look when we go up there.
On Sunday night we spotted what we assume was some local hoons all set to drive up our little street but when they saw us walking around the house (it was almost dark) they stopped. Instead they drove into the vacant blocks across from us near the bush and found some poor little joey to chase with their car for a good ten minutes. :(
Posted by kexkez at 11:04 PM