Still waiting to hear the outcome on the ceilings. It's with " the boss" atm. One person at work said we should insist on new ceilings but...

I do want oyster lights of our choosing. The trouble is it would be 8 lights and there are 4 others that I would want to match so they would need to be purchased at the same time even if not fitted.

Our retaining wall man came today and attempted to dig 8 tree holes and to spread the organic soil for the lawn. Soil area looks great although I need to get some more soil 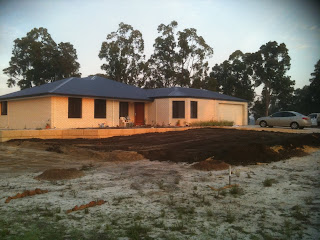 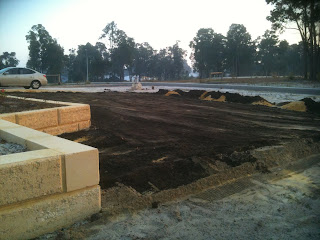 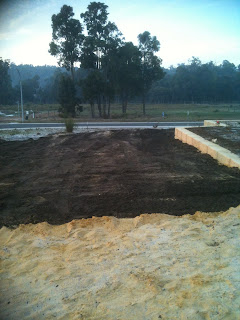 . BUT he had a slight problem with a couple of the tree holes. oops. Seems we will not be able to go for the super large sized trees as he wasn't able to dig down far enough to get the holes started for us. ROCK!2 of the tree holes in our "avenue " of 5 trees are now out of line as it was the only way he could dig down to at least 600mm.

we were hoping he could get down a bit further) 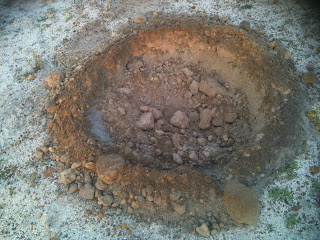 2 of the holes out in the front garden area are also a bit more shallow that we would have hoped for so it means smaller specimens than originally planned. We'll just have to wait for their roots to grow and find their own way between the rocky sections of ground.


Not looking forward to the fencing man appearing as he might have some fun digging the post holes which means additional $ for us.

Our man today charged us $180 for 3 hours work. about 1 1/2-2 hours of it was spreading the dirt. The retic quote we had quoted us $800 to do the same job. You see why I was so disappointed with their quote. I figure if they over charge that much for that part of the job what amount were they planning on over charging us for the retic section. Plus their quote didn't include the plumber or the sparkie they'd originally said they'd organise. So that would be on top again. If it had included that we would have been happy for them to do the work even with a 2nd day of bobcat work at $800 ( well maybe)
Their lawn laying price wasn't too different to what we'd been quoted from the lawn place anyway but they knew we knew the price on that.