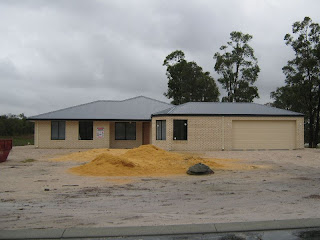 ok very slow, patchy progress atm. Painful to watch because we just want the keys. painters had almost a week with nothing done. we heard the main painter was ill. But the rest of his team should have been there. Still if he was there and they painted grey splotches on our white eaves...

today they've lowered the garage door, put globes in all the light fittings. removed the builders power box and we have power to the power box and a little green power hub and power. We've both tested the light in the garage.

the jarrah caps inside have been varnished. They are still only part way through external 2nd gloss coats and nothing can be done atm because of the wild weather here.

It looks like the sparkie was back today which really peeves us off because we worked out on monday that he'd not completed something properly. We have the proof. we have part of our ixl's that he threw away that were supposed to be installed.

Since we were half expecting a call from our S.S. we thought we'd tell him then rather than start complaining. But if we'd known he was returning during the week we could have hassled the sparkie direct. we bought the Eco tastic ixls which have a flap that needs to be fitted and which closes over the vents so cold air doesn't get in. the damn sparkie threw them in the rubbish with the empty box instead of fitting them! it was an extra 60-80 dollars worth buying this version instead of the basic version just so we had the flaps so we aren't too pleased.
Posted by kexkez at 5:01 PM