As the title says.

Garage slab is still to be done but we think the rest is now complete. 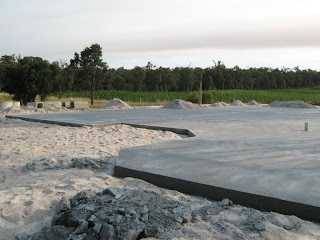 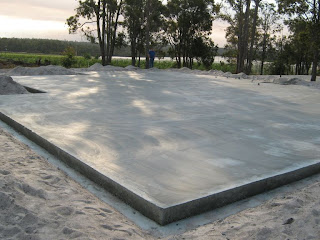 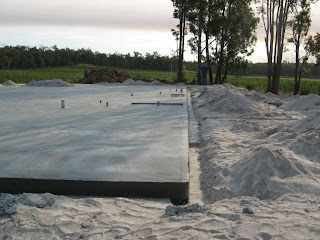 Our title arrived May 1st. we'd been in negotiation with the builder for several months previous to that. and finally jsut over 6 months later we have a slab. Yippeee.

Anyway. The slab looks nice and smooth. Weather here is warm but not too warm so hopefully the slab will cure without too many cracks and they will complete the garage section tomorrow( fingers crossed) I guess that means the brickies can start in a couple of weeks. Hopefully they'll have made a start by December. It would be even better if the brick work was completed before the xmas break but we'll see.

I have a sneaking suspicion we might get the same brickies from a house I know someone else is building in a nearby town. Same builder and I would have thought his brickies would have started this week. I drive past his block every day to go to work and the bricks haven't been delivered there yet. I feel quite frustrated for him and his wife. I'm beginning to think the builders want to have them go straight to our job from his. I've just heard that his brickies are due to start next week and I would expect they'd be finished there around about the time our slab is ready for bricks.
Still no portaloo and waste bin for the rubbish which is mounting daily.

Another blogger and HO member suggested that they might do the garage at the end of the build.