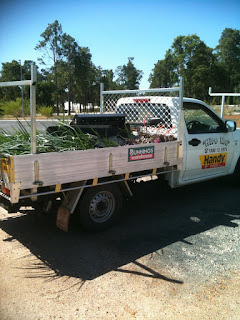 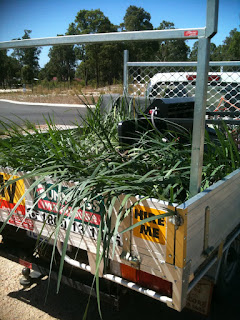 Had a little adventure this weekend. I feel a bit over whelmed but that could be the wine I am now enjoying.

This weekend was a 3 day weekend <> so I had organised to pick Mum up from Perth, approx 225 kms away and bring her back here. I booked a Bunnings ute/truck for the Friday night collection for a 24 hours stint. My plan was to collect the "ute", drive to Mums and then sleep, load up the ute and drive home and then return the ute before the 24 hours was up. I also had in mind the idea to bid on some ebay items that were due for collection on the Saturday morning. I managed to win a nice large 68 cm flat clr tv yippee to replace our 24 yer old tv on it's last legs that the kids watched in their play room, to collect. My problem turned out to be that in my flurry of ebay bids one slipped in that I had missed checking location on and was a good 30 kms from Mums oops and yes I won it.


Anyway Collecting the beast managed to be not too bad except for getting used to driving a manual car after 6 + years driving an auto. ( spent almost 10 mins in the car park convincing myself that perhaps there was something wrong until I finally let the clutch out far enough to reverse)
At this point I must say I only manged to stall the car once in the entire 24 hours of driving time!( forgot the clutch) Which I am quite proud of.

Anyway I finally got out of the Bunning car park and started heading to Perth on Friday night. After the first 180 or so KMs it started to get a little dark and I noticed the dash lights were not working!!!! arghh.. I drove the rest of the way relying on other cars and the occasional light from a street light and I have to admit the light from my iphone a couple of times to double check the speed. phew. Saturday morning i was able to find the dash dimmer switch but because it was quite bright by this stage I couldn't tell if the dimmer switch had just been turned right down or if the light was truly broken.

Eventually I arrived at Mums to discover she'd organised the neighbours to load on the BBQ in the dark.. errm yeah Mum, wonderful. I was hot , tired and hungry and wanted a rest, I really didn't care. Morning came and I drove off to collect the tv 30 kms away and return. We then frantically loaded up the rest of the truck with plants. jammed packed. and the scary thing is Mum still has more of the same. We loaded the truck frantically for 45 minds or so and then tried to cool off before leaving asap.
Mum has decided to sell her house and find a retirement village. I kept asking her if there was anything else she wanted me to take. Of course once we got home she thought of several large, heavy items. blahhh frustrating as I can take the plants in the car boot but not heavy stuff so while the ute/truck was hired it was a perfect opportunity for heavy things.

And off we went. the ride was very hot and windy, the truck was supposedly airconditioned but the air was hot not cool. We stopped within a 100 kms of home and bought petrol to fill the tank at Perth/city prices and as we stat trying to cool off before getting back into the truck a g/f rang wanting to know what we were doing tomorrow. Nothing I said. A very good friend I had not seen much recently, I was thrilled to have her planning to visit us.


We got home by 2.30 but needed to leave by 3 to meet some people at a retirement village in Bunbury at 3.30 to check it out as a possible place for Mum to buy into. phew...

Home we came, then there were frantic actions to unload the truck, clean it out, grab a drink and quick refresh before heading to Bunbury. We made it to the Retirement Village and the people we were meeting for 3.45, only 15 mins late. All hot and bothered but we did it. .. Mum enjoyed her visit and discovered she had a bit in common with the people I'd found for her to meet. at 5.00 we said our goodbyes and hurried off from our visit to get petrol and return the Ute in time for its 5.30 return. JUST.

Phew I discovered I had traveled 487 Kms in barely 24 hours. ( the Bunnings man had forgotten to write down my starting milage, I personally know I had to have done more than this as I think it was well over the 500 kms. ) BUT given they charge heaps of additional mileage for every km over 100kms i wasn't going to say a thing.

Hubby and the boys met us at Bunnings and we went to the foreshore to cool off for 30 mins and then further into town for a Chinese meal to finish off the evening. Mum was a bit heat struck and so was I. Thank goodness Hubby was driving home.

we had a quiet Saturday night. :) Yesterday, (Sunday) Mum and I decide we'd investigate the fresh markets in the next town !4 kms away, we'd be back by 10 and then check out the 2 junk shops in town to see if we could find a cheap tv type cabinet for the new tv. we made it through the markets and began t head back to town when my gf rang to say she was 1 street from us. oops. only 10 hours ahead of expected. So directions given and by the time Mum and I got home she was there having a cuppa with Hubby. Poor hubby, even females to males but him the only adult male... I think he found it tough as I scrubbed off the bbq and he was pretty much "informed" by the others that "he" was the bbq cook. hmm not my doing. I usually BBQ. Not that we BBQ often.


Last night we had a great BBQ. Two hours or so afterwards Mum went off to bed and g/f and I went off to try and investigate where some "live' music was coming from. No luck .. oh well. off to bed for visitors and I finally crawled into bed at around 1.
Anyway it's 4.12pm Monday now My g/f left early-ish this morning and Mum got on a bus to take her to the trainstation to head back to Perth at just before 2pm.


I feel a bit numb. ( might be the wine) I need a weekend to recover though as much as I loved the visitors. Is this how it is for other people who have visitors??? It's a bit of a rare occasion for us as we live a fairly quiet life normally.