Our sparkie was booked for 8 am yesterday. Well Sparkies are never on time right?

Hmm Well this one comes early!

So there I was still in my pj's sorting out washing and there was a knock on the door. 7.10 am. Oh dear.

Hubby was no use at all having worked until quite late on Friday night he was mostly asleep still as I muttered about a knock at the door and frantically hunted for something to put on.

Anyway job is done. Fans look fabulous. Of course it wasn't warm enough to really use them yesterday. isn't that always the way. But it's sure to warm up again many times in the next couple of months. Sparkie cleaned up everything and took away the old chinamen hats and empty boxes etc. 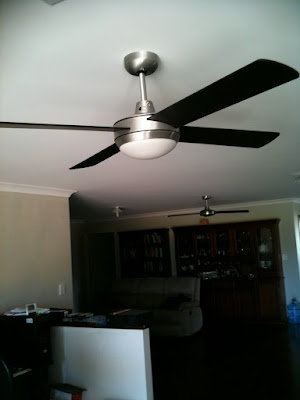 It seems timing is everything and we certainly haven't got it.
Perfect example to follow.

Last night I went to turn the laundry light on and discovered the light wasn't working.
Then I realised that when the sparkie had packed up everything he had also packed up the old globes. duh! 4 perfectly good, old tech incandescent globes.
Ok no worries I thought. I'll ask hubby to put in a replacement globe as he can replace a globe without needing a chair. It was then that I found out that Hubby had noticed 2 days before the globe wasn't working but hadn't gotten around to replacing it. It had been a busy couple of days and who thinks to use the light in the laundry that often. it had just been forgotten about. Shouldn't have really been a problem until... wait for it... When he went to replace it he discovered not only was the globe not working but the actual fitting part the globe goes into seems to be broken. hmm if only he'd tried to replace the globe sometime in the previous 2 days. It looks, according to him, like a job for an electrician. :( See what I mean about timing.

Call out fees etc and to think we'd had an electrician in the house just 8 hours earlier. Timing! I did wonder for a minute if the sparkie might have damaged the fitting somehow from above as he installed a ceiling fan in the rooms nearby but the globe is actually broken so it's likely the damage was done before that. No idea how.

For those of you reading from other parts of the world here in Australia you aren't allowed to do your own electrical work. Hubby is going to try and take a closer look today to see if he can work out exactly what it is that is wrong with the fitting and if it's something that he can fix himself. A shame the sparkie has also taken all the fitting bits of the 4 lights that were replaced with fans as this is probably what will be needed. rats!

No way do I want to call out an electrican to fix what will likely be a 5 minute repair/replacement job. With a huge callout fee the job will be a ridiculous price. We do have plans to have some more lights fitted that will require a sparkie but had no plans to do so for at least another year. So hopefully it is something hubby can fix or otherwise we'll be living with no laundry light. What a pain.
Posted by kexkez at 7:50 AM