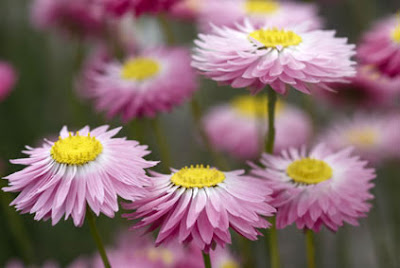 Hubby has dug the soakwells in a fair way but not technically as far as he is meant to go. Soakwells are meant to be buried with their lids 600mm below ground but in the case of our soakwells they are around 300mm below ground level. The first 3/4 is digging into sand but after that it's sheer determination, bloody mindedness , energy and luck as to how far down he can get. When you hit huge rocks and they can't be dug out by hand there is only so much you can do. G has been digging out the smaller ones but after relocating the holes numerous time to allow for bigger rocks i't becomes a matter of get the soakwells in where you can. After these two he only has one more to go.

Meanwhile I had another go at planting some things in the front and marking out garden areas.

As a friend (W) who lives nearby recently said, " If you want to plant anything it means using a crowbar or a pick." He wasn't exaggerating. Dug 15 holes to plant some border plants using a pick and a trowel. Went back 3 hours later and realised that most were in the wrong position so out came the pick again to move them. Must learn to wear gardening gloves and remove rings. I have a lovely blood blister at the base of one finger now.

I think I had better refrain from gardening today.

We were given a weather station by the inlaws on Friday. Youngest helped me put it together and we placed it in the "garden" to try it out. It has a fairly accurate temperature thermometer. Compared it this morning with another weather station tool I'd bought Hubby for his birthday and it was pretty much on the button. 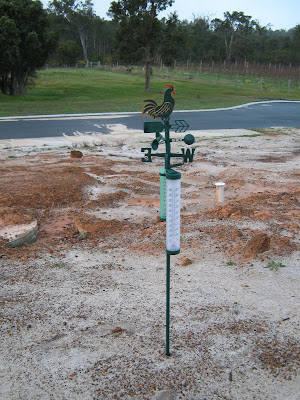 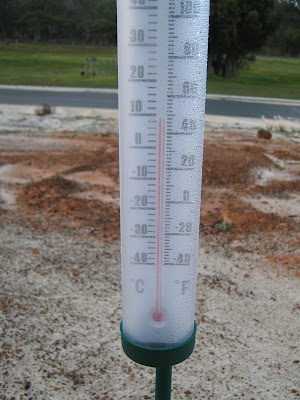 I am on LSL atm. My 2nd and final week about to start. Should have been in Bali but it was not to be so spending time here getting a few things done, feeling a bit down in the dumps over missing out on Bali but also fighting off a slight cold which I've had now for more than a week.

Most inspired by a friends garden. W & P have been here 2 years and are on a 1/2 acre block and there is barely a vacant patch of ground. Lots of native plants but they also have roses and at least one camelia and several raised veggie beds. I really want to get some soil in to do proper garden beds. I've ordered a couple of" ned kelly" grevillias. yippee should be here in a week or 2. I intend to plant them below the trees out the back. Mum has offered to propagate some kangaroo paws from seed for me and I will have to do a trip up to Perth with minimum luggage and passengers and fill the car with more plants. Hopefully will get to collect a mulberry tree from Maggie, from H1 who offered to grow one from a cutting for me.
When we first lived in Joondalup there was a huge sand bank just across from the estate entrance area that was covered with paper daises ( everlastings) I loved seeing it each year and I am hugely tempted to plant some here. I've noticed seed bags of them for sale in the local hardware store. When we went to visit W and P's last week I noticed they have a small drift of them at the front of their house.

It's funny that I love everlastings as I'm not a fan of pink flowers and pink themed gardens. 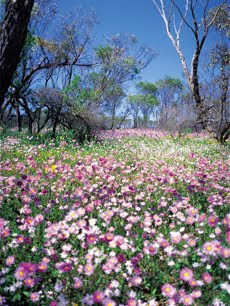 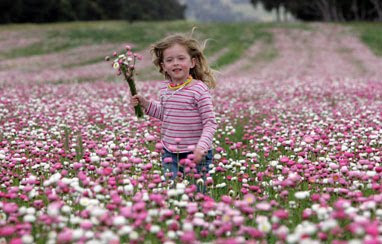 Saturday.
Getting ready to return from Perth on Friday afternoon my eldest declared that he'd really like to go in costume to to local Medieval Fair on Saturday. So we had a last minute dash around to a fabric shop and I managed to pick up some black poplin fairly cheaply and also some stretchy silver material. Youngest declared he wanted to dress as a thief. In the end I talked him into wearing a cape with a hood. ( what a sewing disaster ) 2 attempts later he had to live with a some what sad cape. Eldest had declared he fancied being a monk. He had visions of a "Monty Pythons search for a holy grail" type monk. Forgot completely about him needing a cross or prayer book to carry. Luckily G was able to fashion a cross from the stem of some bracken while we watched youngest play soccer on Saturday morning at the local oval in the town where the fair was held. Given the short sewing time I'm quite pleased with his monk tunic and hood but the stretchy silver fabric was a nightmare to sew and I ended up re-cutting fabric and leaving it with mostly raw ends as you can see from the photo. After all the late night sewing we didn't end up staying long since youngest had the beginnings of a nasty cold and felt quite miserable. 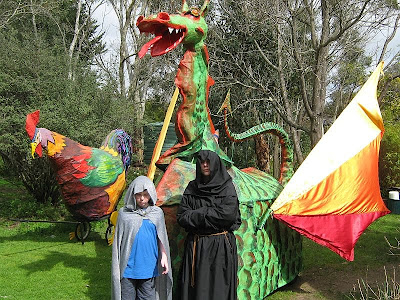