They struck a bit of rock and couldn't quite get down as far as they'd hoped in a few places.
This means several of the bottom row of blocks had to be trimmed slightly where the rock was too hard to scrap/cut through.

It is looking good so far. They've be back on Monday to continue. We have a Tropical cyclone warning that is current at the moment so  the weather has been really warm and humid. It was on about 38-39C yesterday when the guys stopped at 1.30.

We have to go outside and do a bit of a clean up later this morning. Pack away their tools and the star pickets etc. Don't want tools flying around the yard in the destructive winds expected later. But right now the rain has stopped and the birds are chirping. There is even a bit of sunshine and some small patches of blue sky. Earlier pretty much all the sky was blue black and grey. No one knows whether the cyclone will peter out before it hits the coast but even if it does high winds are expected. We are only 35 kms from the coast here and until this morning in a direct line for where it was expected to cross the coast tomorrow morning. The weather advisory is that it will now be slightly north of us. ( about 100kms) .
Posted by kexkez at 8:56 AM No comments:

Today I'm hoping our last retaining wall will be started. This will be for the back and side of the house that is not on view from the street. Once it is finished then we've asked "A" to organise some tailings for our drive way. The blocks arrived yesterday. At least some did. We've been told we will have 71 full sized and 9 half blocks for the wall but only 64 full blocks arrived yesterday.  Hopefully "A" our retaining wall man will bring the rest with him.

So here's what it looks like at the moment. 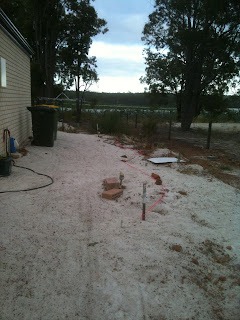 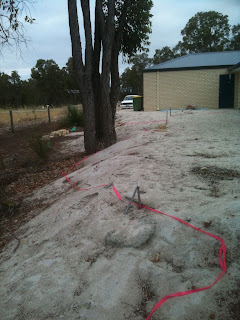 Clothes line looking towards the back of the garage 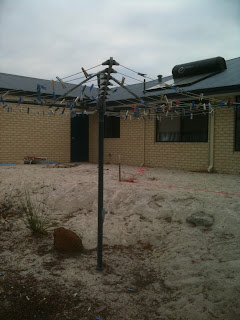 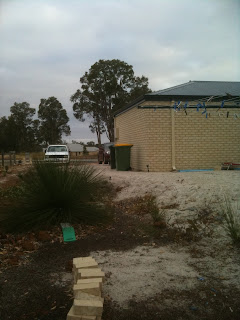 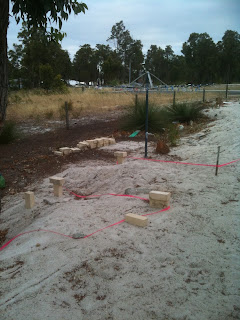 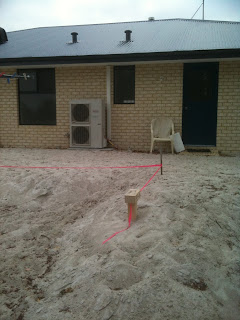 Left and right sides of future steps down from the laundry area to the clothes line. 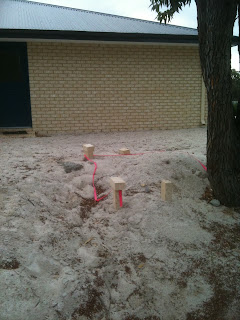 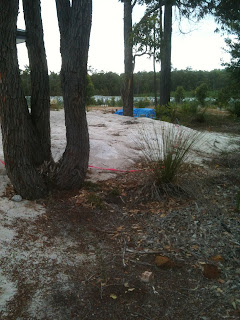 On the  Right hand side of the steps is this tree. At the moment it is being buried in sand. Once the retaining wall goes up we can uncover it before it rots.  We have the same problem at the back of the house  where the retaining wall will turn the corner. 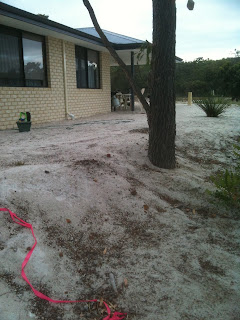 You can see it in this shot  where the retaining wall will  go. Looking towards the alfresco at the back of the house. 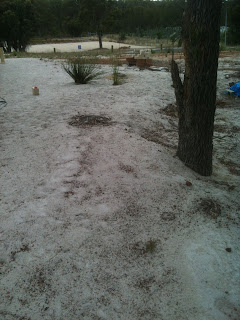 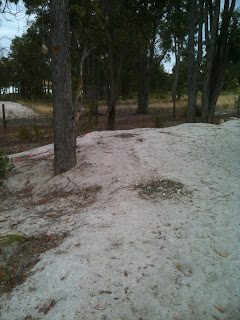 Posted by kexkez at 7:15 AM No comments:

I just gave it a molasses watering this morning before G put the sprinkler on. Today being one of our 2 watering days.
Lawn is a bit bumpy. I'm guessing that we'll eventually add a little organic matter to the top of it and try and even it out. We didn't use a compactor just lots of raking to level it out before the lawn was laid.
Our organic soil improver was quite lumpy and had errm additional organic things in it ( pig poo) that meant it wasn't super smooth. I'm hoping it will not hinder the lawns long term development too much.

I've added pea straw to much of the front garden beds. This is a bit thin in places. I could do with a couple more bales. It all takes time and $. Lots of learning going on with the veggies.

Most of the pea straw went down about 2-3 weeks or so after they were planted.  But I neglected to add any around my veggies. Big mistake as now my lebanese cucumbers have fried in the  heat.  Straw is there now ready for my next lot of seedlings. This time  I won't make the same mistake. There's a little bit of overflow of the soil improver dirt/compost where the veggies are but behind that where the carrots are and the natives begin its tough going. Sloping level and slightly water resistant. I'll be improving the soil before the new seedlings go in.


Some of the Chilli  seeds did germinate.  Given the state of the ground I'm surprised I got any to grow at all. They are really struggling.

The abelias are in the rose garden area. This has extra stuff dug in. Not exactly where they are but nearby for the roses. The abelias are a second batch. The first got planted in Dec last year and fried. I kept a few alive but really shouldn't have bothered. They aren't strong and have slowed the development of the mini hedge down. I grabbed some cuttings from else where and grew some new stock myself for a few others and they are tiny but strong and healthy. The larger plants I bought in April.They have been pruned by 1/3 their height twice and are at least 4/ 5 times bigger in size ( thicker and double the height than when we originally got them. They need a prune again now.

I am waiting for large silver birch stock to appear in a few months for 2 more spots. But given the way the tube stock has grown I'm wondering if we should have just bought smaller stock. It probably would have caught up.
Most of the tube stock has been down about 3 months. We haven't given them as much water as I would like and most have tripled in size. They were pretty much in bare dirt the first month or so and the soil is pretty terrible. I didn't add anything to it and it's like silt. Silt and stones.

This is a Grevillea "Ned Kelly." I searched for one of these for about 18 months when w e first moved down here. We had one at our last house and the nectar feeding birds and bees  loved it.  No one had any stock.  Just after we moved into the new house I finally  came across one. It  wasn't very healthy and was extremely leggy. We have a lot of strong winds here and in the pot it was very top heavy. I cut the top half off and kept it in a pot for another 10 or so months before I was able to plant it.  It wasn't a happy plant at all.  It was planted right on the boundary of all the rich composted, improved soil that we brought it. It went into shock, the leaves went orange and yellow and I thought it would die.   I gave it a number of waters with a solution of... (? can't remember now) to balance the soil ph a bit and now 6 months later it seems to be very happy.  Lots of side growth.

I'm quite pleased as yesterday  I found more in BIG W. Of all places! ( discount department store for those overseas readers) The store had discounted 4 different varieties of Grevilleas down to less than 1/3 of their normal price which would still have been less than I paid for my last one. and this was one of them.  I've bought 3 more to be part of our side ( main road) fence hedge.  They were $4.92 each.They are looking a bit dry but are nice shaped plants.


I wouldn't recommend one of these tap fittings. 2 way adapter. from Big W. Thought I'd use a remaining bit of a big W voucher on one of these. Darn thing leaks no matter hard much I tighten it. Hopefully there is a good quality non leak version available at some more, garden orientated store.